The prefilled syringes available in the market have undergone various technological advancements in features. In the recent years, manufacturers have

The prefilled syringes available in the market have undergone various technological advancements in features. In the recent years, manufacturers have developed several prefilled syringes that are compatible with various drug formulations, including biologics and lyophilized drugs. These technical modifications of prefilled syringes have made self-injection easier, more comfortable, and reliable for the end users.

In 1980, EpiPen (epinephrine for treatment of anaphylaxis), the first autoinjector with prefilled syringe as primary container was launched and registered in the US; a few years later, it was also launched in the UK. In order to make self-injection and administration of injectables at home more convenient and comfortable, prefilled syringes were launched as pen-injectors for insulin for the first time by Novo Nordisk in 1985. With new drugs being launched in the market in prefilled syringe format, the first reusable autoinjector (Imigran / Imitrex) was launched by GlaxoSmithKline for treating migraine in 1990s. Prefilled syringes gained popularity because their use eliminates several preparation steps prior to drug administration, thus making drug delivery simpler.

To address the limitations of glass prefilled syringes, such as glass fragility, shift in pH and dimensional variability, new polymer based syringes (COP and COC) were launched in the 2000s. In mid-2002, SCHOTT launched its first polymer based syringe made from Topas, a COC resin which is being used to package drugs, such as Eligard. In June 2004, Becton Dickinson announced the launch of its plastic prefilled syringe system – Sterifill Sterile, Clean and Ready-to-fill Format (SCF), a premium plastic syringe system made from BD Crystal Clear Polymer (CCP). It is latex-free and delivered in SCF. With low level of extractables and excellent barrier properties, the syringe is well suited for contrast media, highly viscous solutions, and general or local anesthetics.

The challenge of extractables and leachables due to siliconization of glass prefilled syringes was eventually addressed by different manufacturers. In 2007, Gerresheimer introduced baked-on siliconization for sensitive drugs. This technique involves the application of silicone oil as an emulsion which is then baked on to the glass surface.

In 2016, the FDA granted 510(k) clearance to a medical device, which is sterilized using Noxilizer’s nitrogen dioxide process. The process can be used for the sterilization of drug-delivery systems and medical devices, such as prefilled syringes. It is suitable for the products that face challenges with ETO, gamma radiation or other conventional sterilization methods.

Figure below gives an overview of the technological evolution of prefilled syringe. 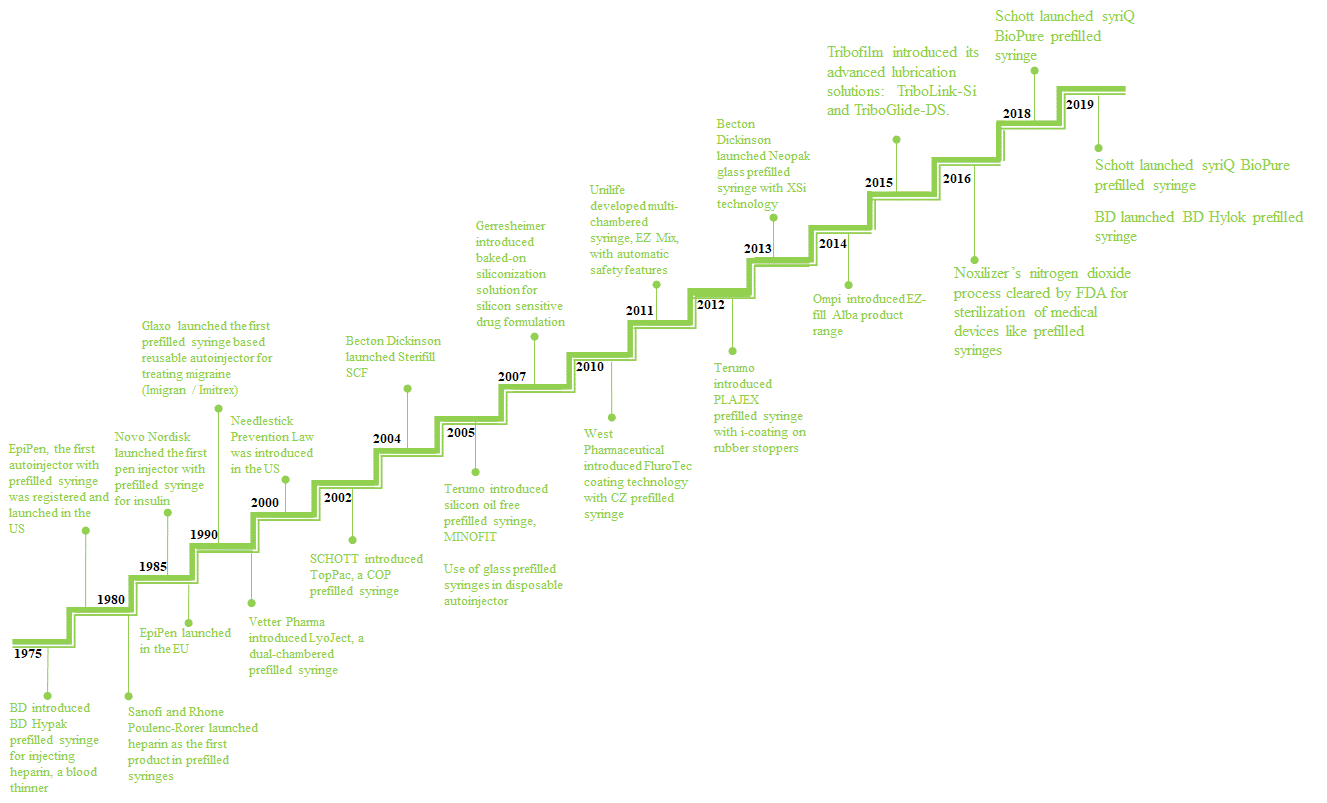 In 2018, Schott launched syriQ BioPure syringe to enhance its iQ platform. syriQ BioPure is a glass-based syringe developed for the delivery of sensitive drugs. The company claimed that the prefilled syringe system is designed to ensure drug stability and to offer easy administration of drugs. Further, in 2019, Schott launched SCHOTT TopPac, a polymer based syringe, specifically designed for the delivery of cosmetic and medical drugs (involving hyaluronic acid).

In 2019, BD also launched its new glass barrel prefilled syringe, BD Hylok. The company developed this syringe for the delivery of highly viscous solutions, such as hyaluronic acid and dermal fillers.

Loading...
Newer Post
Prefilled Syringes Market is Likely to Grow at a CAGR of More than 4%
Older Post
Banking & Finance App Solutions You Must Vouch For!